“A reimagination of the legendary Winchester repeating rifle"

The partnership between The Unnamed Society and L'Epée 1839 opens another stunning creation imagined for those who set the bar for the Art of Gifting a bit higher than the rest, for appreciators of the finer things and for visionary collectors, and takes creativity, aesthetics and artisanship to the highest level.

Golden Boy is a work of art in form and function and remains true as ever to the spirit of "creating the impossible that defies the imagination" by looking not just at a timekeeper as an expression of aesthetic, engineering and artisanship excellence, but as a true witness of its time.

It is one thing to hold and handle Golden Boy, and feel transported into another age. The age of your own childhood, when playing the various roles that defined the conquest of the West - cowboy, Indian, soldier, settler - would first fill afternoons and then late night dreams. Golden Boy takes you there.

What made the lever action repeating rifle such a gamechanger back in the day was the revolutionary approach to loading ammunition, cocking the hammer and chambering the bullet in one rapid, fluid motion - with a lever actioned by the trigger hand. Able to hold 15 rounds before having to reload, the original was not only much more practical than a single-shot rifle, but also allowed for excellent handling and accuracy.

Nicknamed the "Gun that Won the West", the Winchester Rifle remains one of the most iconic firearms of all time. Used by both lawmen and outlaws in the Old West, the Winchester rifle so perfectly embodies the legendary struggle between the peacekeepers and the bandits. Favored by many notable figures such as Billy the Kid, Butch Cassidy and Buffalo Bill, it has become a symbol of that time.

For the gun that inspired Golden Boy, the year is 1866. The place : a vast country born less than a century before from the purest of desires, self-determination.

Winchester "Yellow Boy" 1866 name : it wasn't the settlers or bandits who came up with the term 'Yellow Boy' as shorthand for their trusted rifle. 'Yellow Boy' was what the Indians said, when they saw the shingy brass-alloy receiver that housed the cocking and loading mechanism of the lever action rifle.

Historians all agree that the Winchester was a key element and so representation of winning battle. 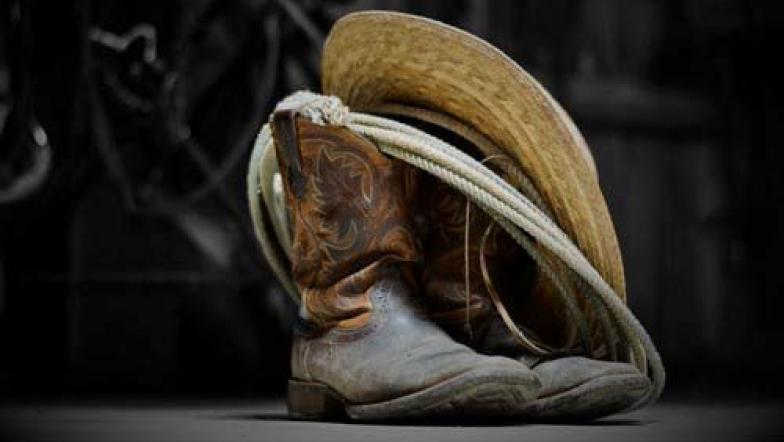 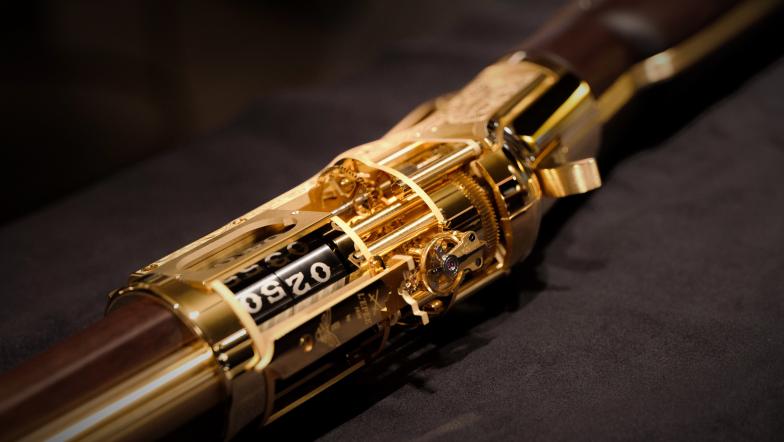 Golden Boy has the same dimensions as the original, the same feel and heft. Holding it is holding the legend. Beholding it is glimpsing the amazing era that defined adventure and fired the imagination of every generation born since.

"Bolting a clock to a gun was never an option, so rethinking the original rifle's ingenious lever action mechanism as a main component of the clock calibre seemed like an irresistible challenge. The result is a work of engineering that transcends its function into a work of art, true to our DNA" : L'Epée 1839 captures this defining movement of the hand as it loads the round and prepares the gun for firing : by having the clock mechanism wound - 'loaded' - in exactly the same way. By actioning the lever 15 times, as for the 15 bullets the 1866 Winchester magazin - the mechanism is fully wound for a 8-day power reserve.

If the bespoke display stand created especially for Golden Boy comes at no extra cost, it is because together they form a whole. Resting on its display on a desk, table or mantel, Golden Boy is an immediate presence in the room. 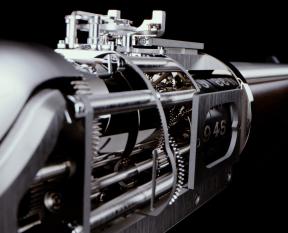 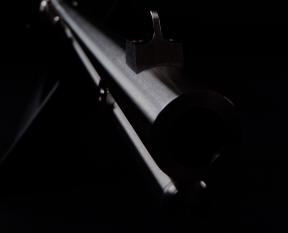 Same feel and heft as the original Winchester Rifle 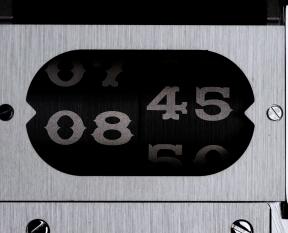 Time is displayed through a window echoing the bullet loading port 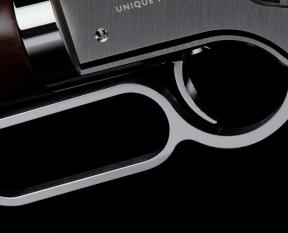 Golden Boy is produced in limited edition of unique pieces

Manual winding by swivel motion of the cocking mechanism of the lever action rifle. By actioning the lever 15 times - as for the 15 bullets the 1866 Winchester magazin - the mechanism is fully wound for 8 days
Time is set by opening up the left side window and turning the disks manually 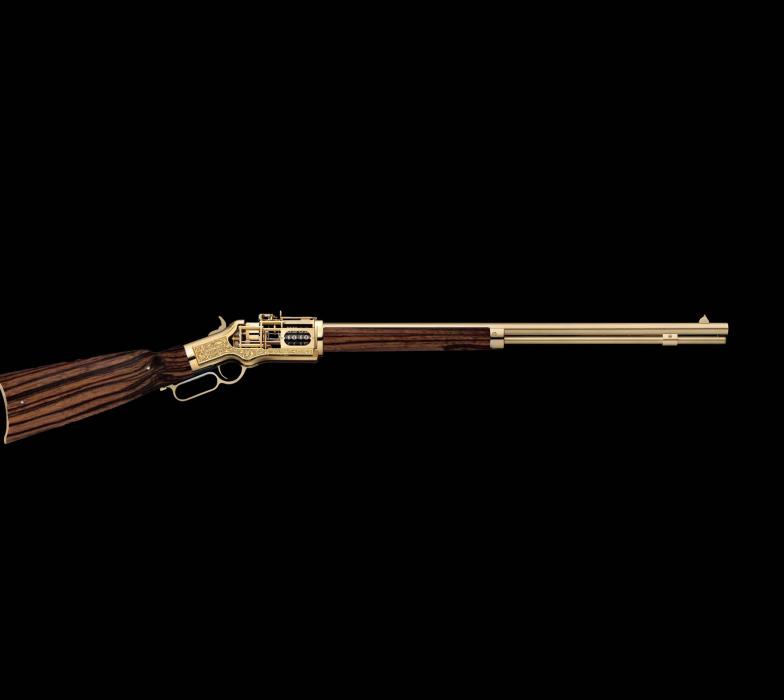 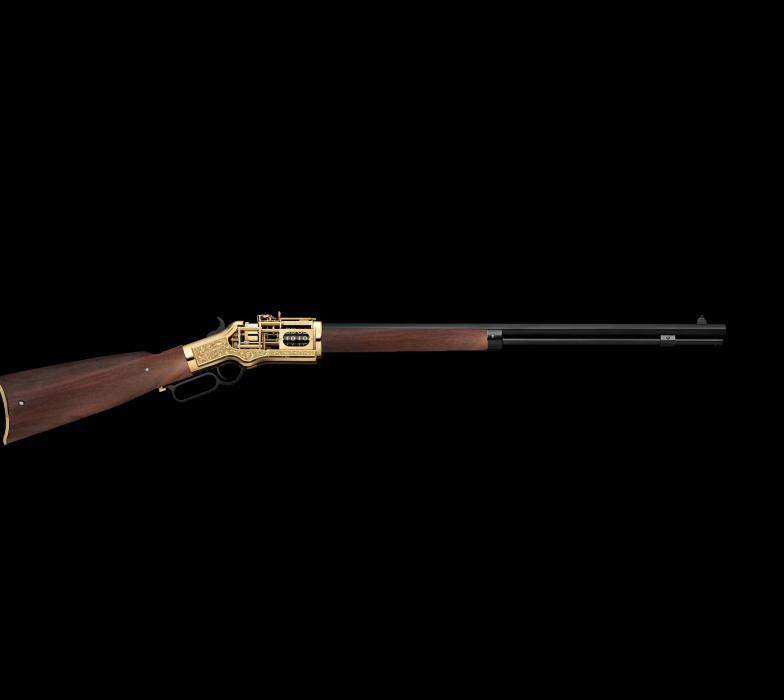 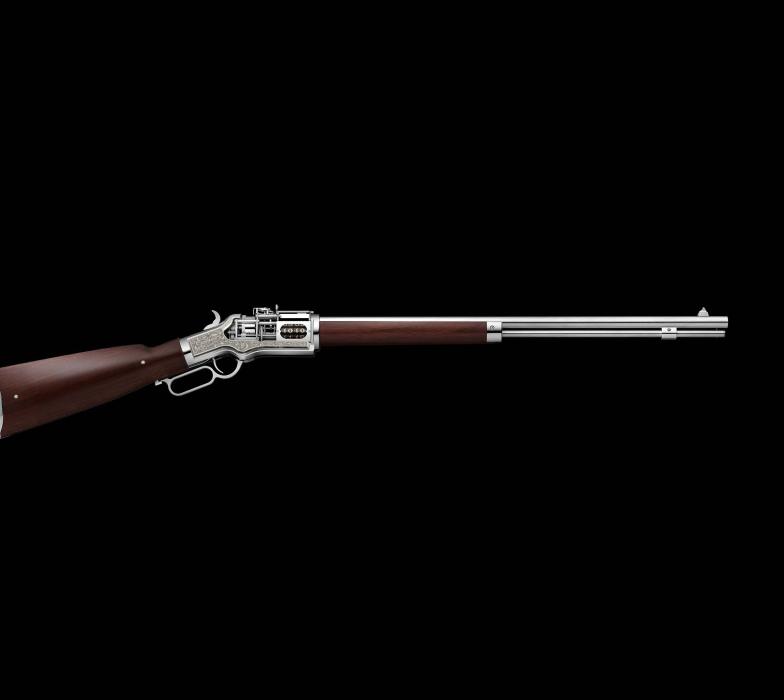 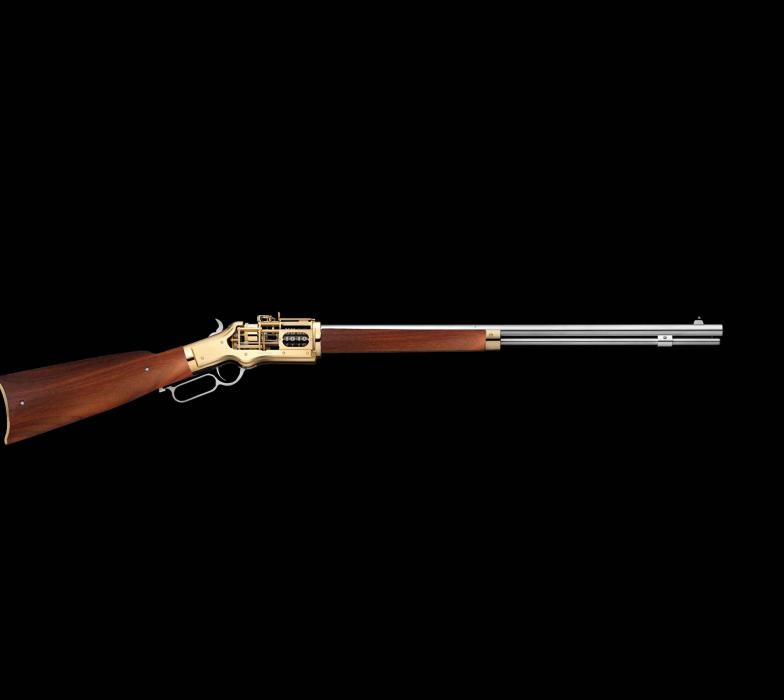 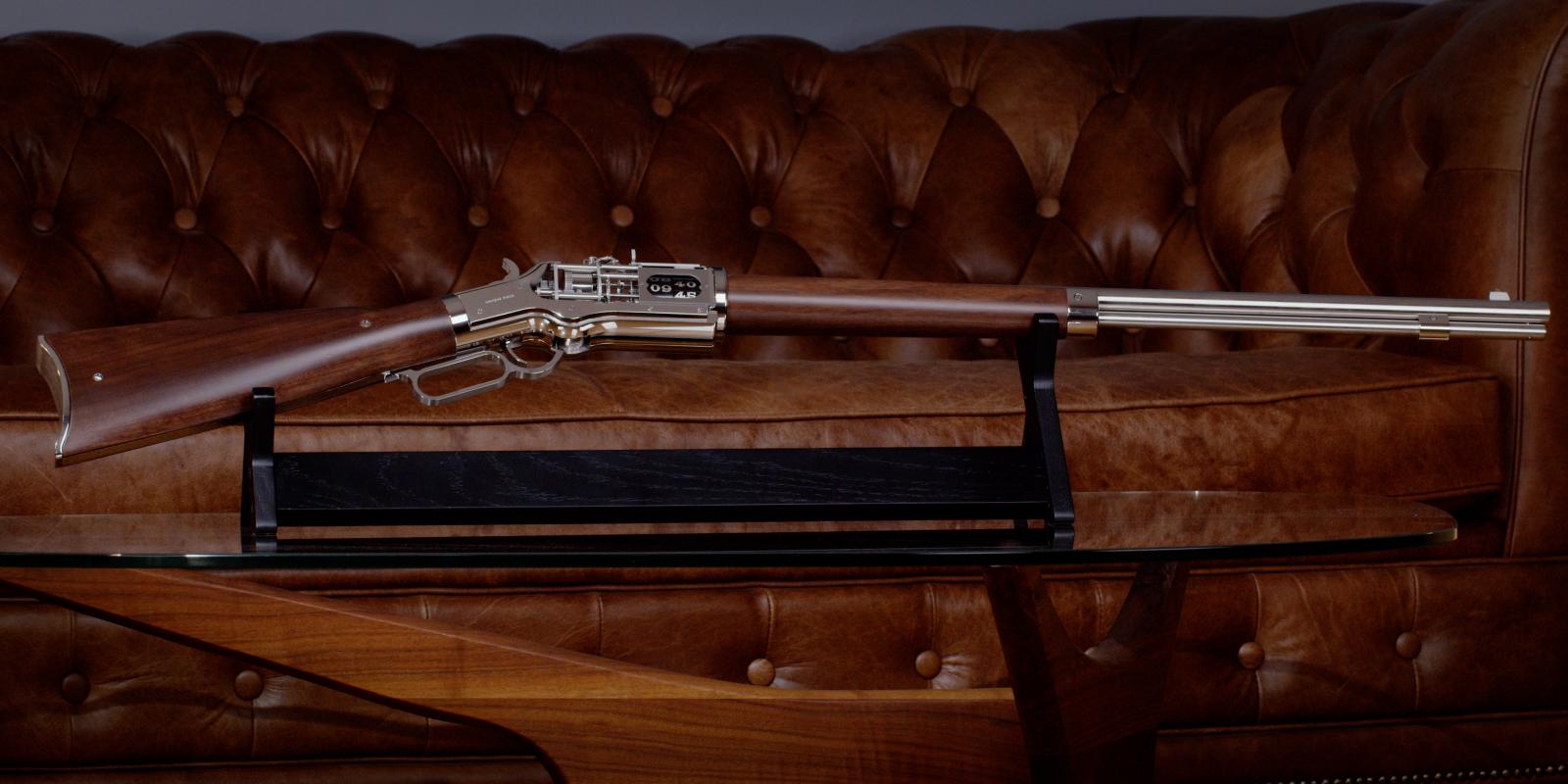 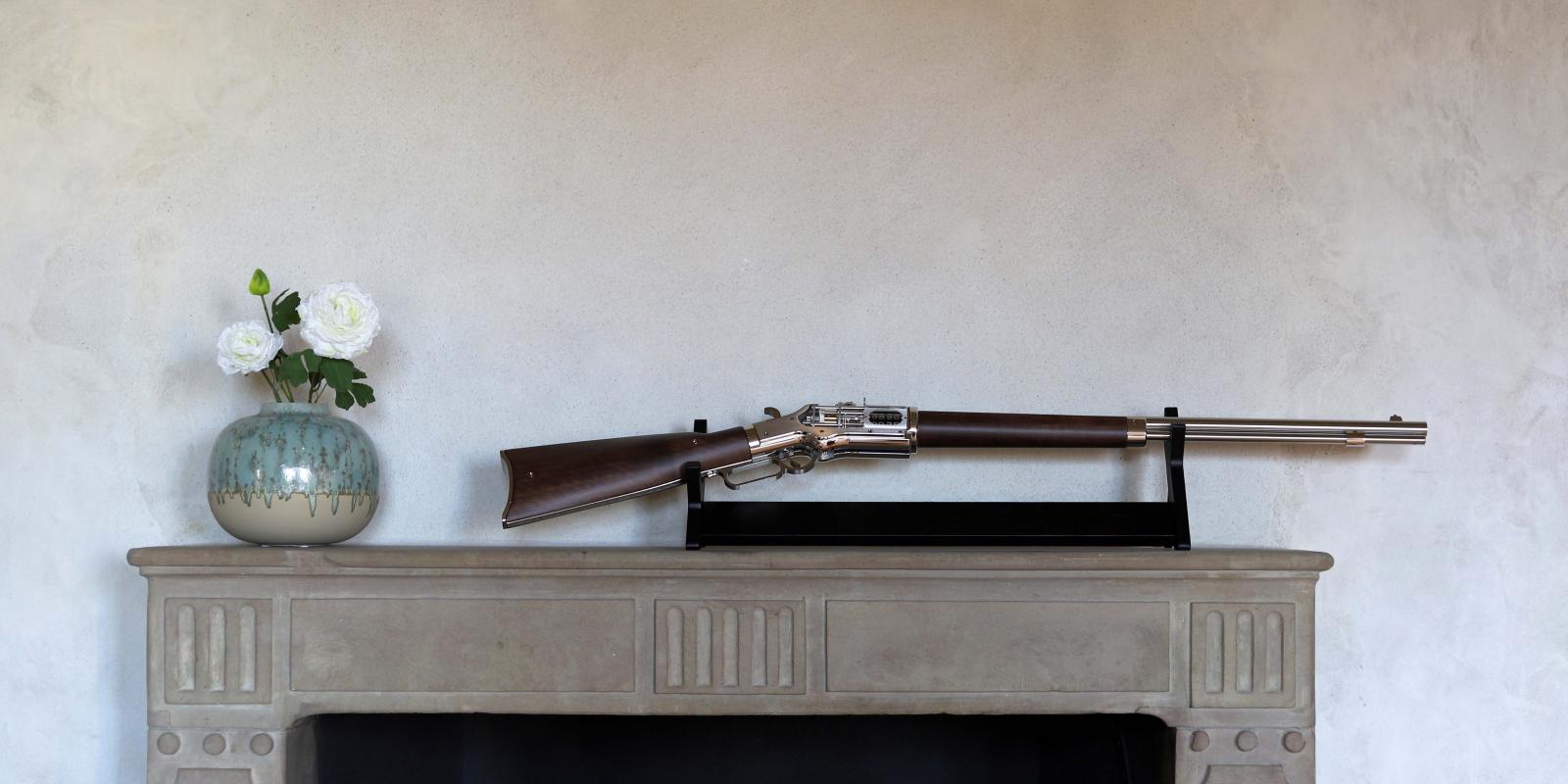 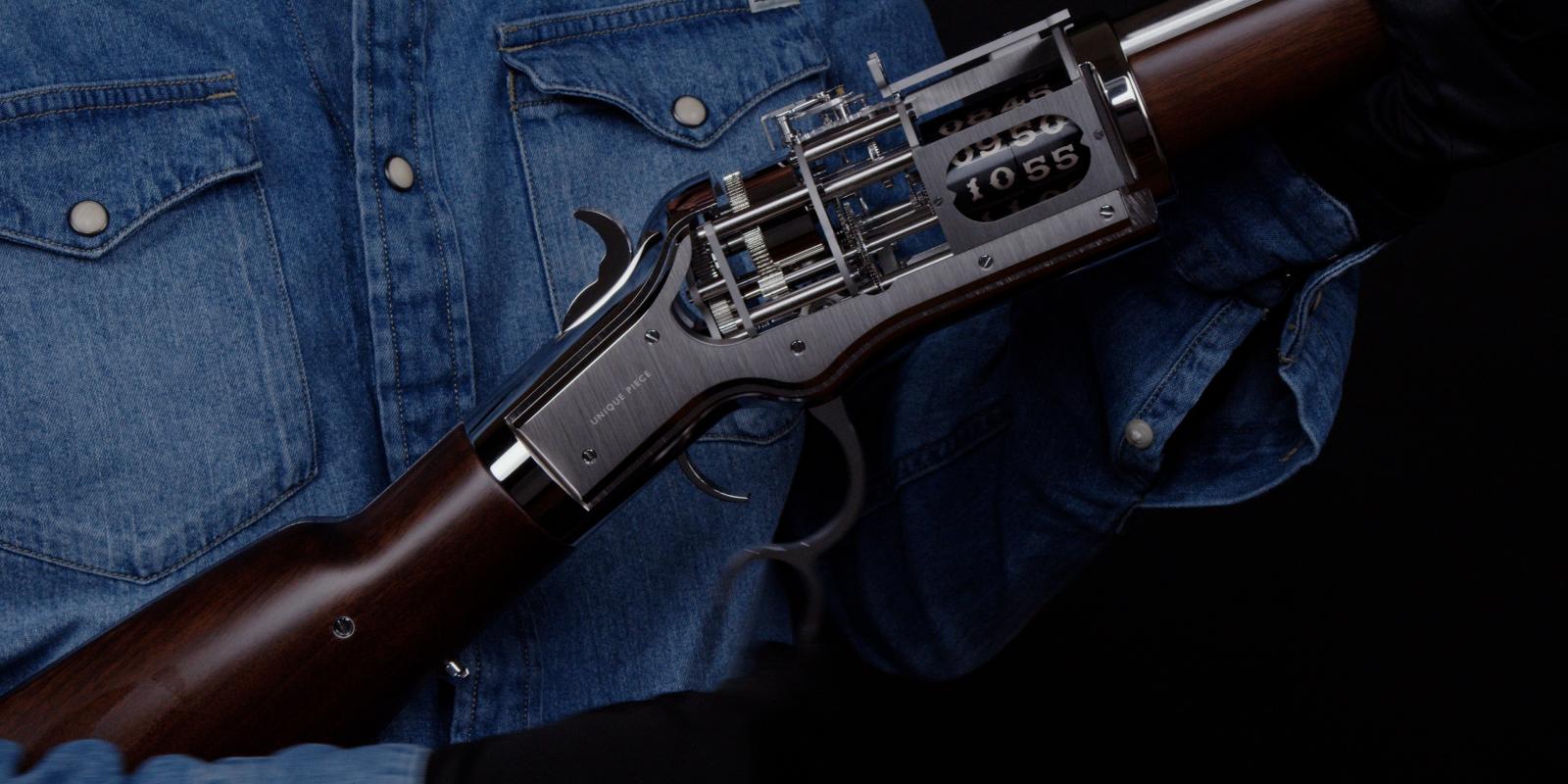 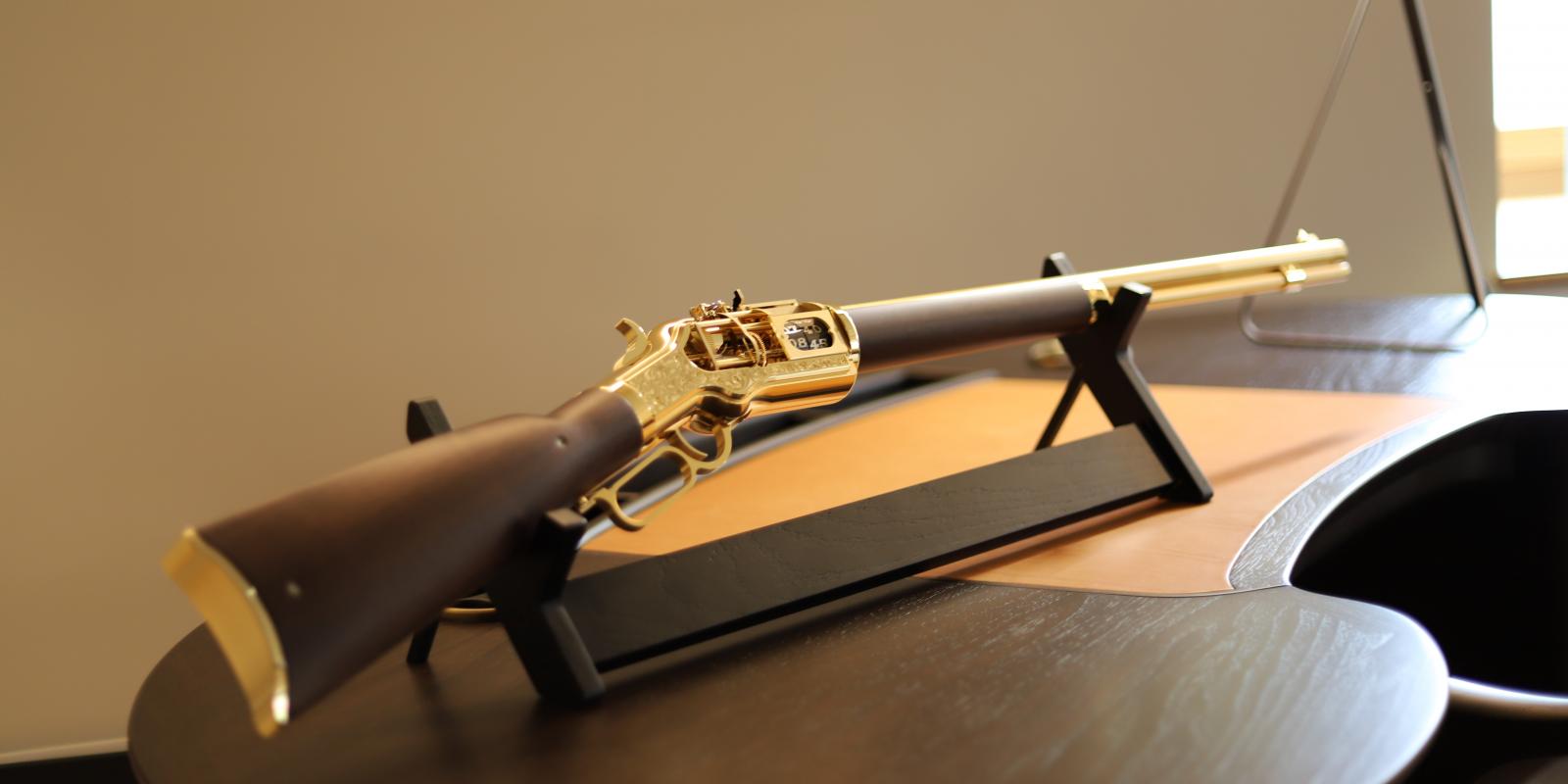 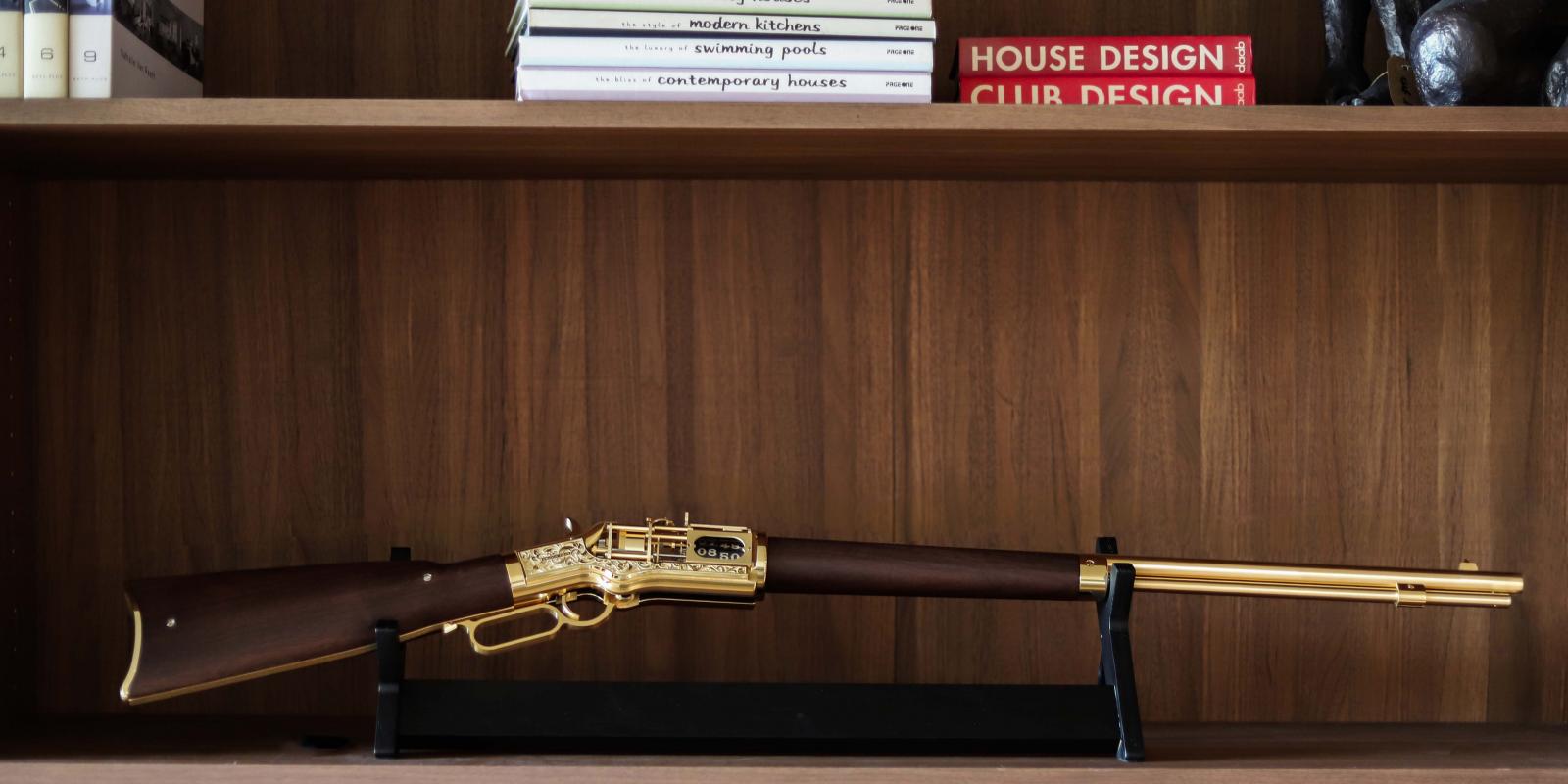